Port Blair on South Andaman Island is the capital city of the Andaman and Nicobar Islands, an Indian territory in the Bay of Bengal. Its seafront Cellular Jail, completed in 1906, hints at its past as a British penal colony and is now a memorial to Indian independence activists. Inland, the Samudrika Marine Museum showcases local marine life. The Anthropological Museum focuses on the islands’ indigenous tribes.

Port Blair is the capital of the 350 odd islands that comprise the Andaman and Nicobar group. Visiting the Andaman and Nicobar Islands is a unique and exhilarating experience. Spectacular scenery, white sandy beaches and swaying palms combine with monuments and museums, world-class diving, swimming and sun basking make this a truly out-of-the-world experience. The Archipelago contains 362 volcanic islands scattered in the Bay of Bengal, with only 37 of these being inhabited. These lush green islands have a colourful historical past, with a string of invasions by the French, Dutch, Japanese and British and wars between settlers and the native tribes. The Cellular Jail, where hundreds of Indian revolutionaries were imprisoned during the Indian freedom struggle, still stands tall. The tropical rain forests that loom close to the seashore are home to unique species of birds, and to tribes that still haven’t learned to use fire.

The Andaman and Nicobar Islands float in splendid isolation in the Bay of Bengal. These islands, islets numbering around 572, are covered with dense rain-fed, damp and evergreen forests and endless varieties of exotic flora and fauna. They are also closely connected to the Indian freedom struggle, the Indian revolutionaries were sent to these islands (Kala Pani), never to return again. Best time to visit: Though the islands are an all year destination, the monsoon months are best avoided. 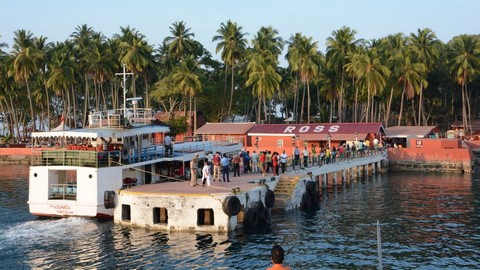 Once the administrative headquarters for the British, until the earthquake in 1941. The British then left the island and settled in Port Blair.